A People of the WORD

I hope and pray that the new born infant Jesus Christ will fill all hearts with a supernatural joy that transcends all human limitations!

You know that I love to share good articles that touch on the most important things of our faith. I hope you enjoy this article as much as I did.

Words and the Word

Pope Benedict once noted that it’s wrong to think of Christianity – on the model of Judaism and Islam – as a religion of the Book. We have our collection of books, the Bible, of course, and should read in it often, and deeply. But we are, he said, more properly speaking, a people of the Word: the Word that was there “In the beginning,” as John’s Gospel says; who then became flesh and dwelt among us; who told his disciples to go forth and carry the Word to all nations; and who by His coming explained nature, history, the past, present, future, and what, after many words in many cultures, remained unclear to us about our very selves and eternal destiny.

Every child who learns to use words is, we forget, an immense, unnatural prodigy. There’s nothing else like it in the whole of our varied world. We’re so strange that we find it hard to believe ourselves. So people try, heroically, to teach chimps to talk or, more recently, study the “communications” among trees. But it’s no use seeking words in the world. There are only our words. And the Word. Because of the Word.

That child lying in the manger in our Christmas crèches, then, the Word who will one day speak to us in our own human words, is a singular occasion for love and joy, as are all human children, and touches our hearts with a truth and tenderness that doesn’t grow stale from one Christmas to the next.

The Word was partly hidden, for the moment, however, probably because it would otherwise engulf us with such enormous light and sound in our current state that it would have rendered us even more deaf, more blind to the really real than we usually are.

It’s right that we get the warm fuzzies and are comforted at this time of year because we get it almost nowhere else, at any other time. And given what we do to one another and ourselves the rest of the time, we need comforting. Still, that comfort is a pale reflection of what awaits those blessed to someday see its source. There will be many things not so comforting in the meantime, not least the great challenges of the Word, which is why the angels are constantly telling everyone – Mary, Joseph, the shepherds – “Be not afraid!”

We are so convinced in the modern Church that essentially everyone goes to some sort of easygoing Heaven that we don’t understand what the real Heaven might mean. George Orwell mocked the usual Christian image as “a choir practice in a jeweler’s shop.” In the greatest Christian poem ever written, Dante’s Divine Comedy, the pilgrim Dante moves into the heavens on his way to the Beatific Vision. But his senses are not being met with cheap glitter in the way Orwell thought. They’re being constantly stretched to be able to bear the sights and sounds of enormous realities that we hardly suspect.

Imagine that. Catholics are often told that we need Purgatory to free our souls from the remaining disordered attachments we may still have after death. But who these days thinks of what it would mean to actually enter into eternal Beatitude, to see God? 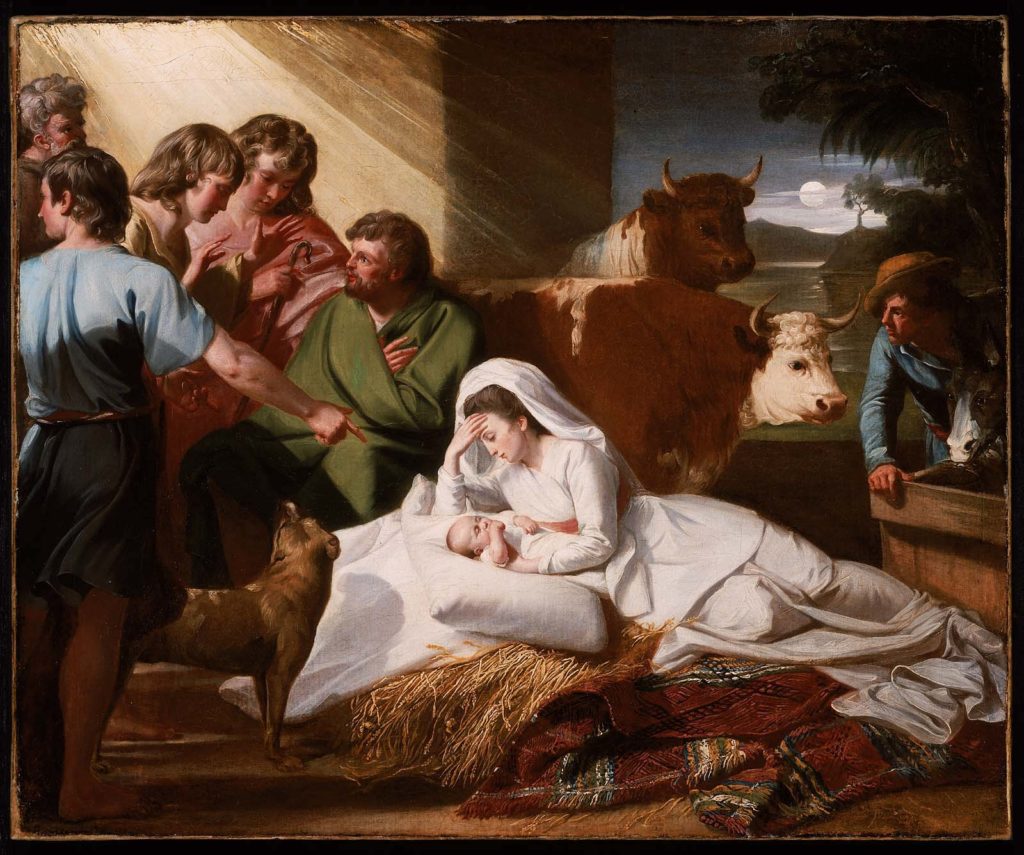 St. Peter was reduced to silly babbling when he saw Jesus merely Transfigured on a “high mountain” where “a voice from the cloud said, ‘This is my Son, whom I love; with him I am well pleased. Listen to him!’ When the disciples heard this, they fell facedown to the ground, terrified.” (Mt. 17:5-6) St. Paul was blind and could not eat or drink for three days after his revelation on the road to Damascus. (Acts 9:9)

Strange as it is to think, the long desired salvation and fulfillment that the Christmas child was to bring, when we really encounter it in even partial fullness, dazzles our natural faculties.

And even in worldly terms, His coming produced fearful signs and wonders. The miracles were one of the signs, He told us, which should bring us to believe – if we could not otherwise. But as happens again and again in the Gospels, people in places where great miracles are performed also ask Him to, please, leave. Even the Apostles are frightened – and wonder who He is – as he saves them from a terrible storm on the Sea of Galilee. When He does things like that, it just upsets too many of the dull, everyday certainties we prefer to the uncertainties of God.

And who can entirely forget, even at the moment of the joyous birth, the strange things he will tell us, and have to do and suffer, in order to fulfill the ancient prophecies, redeem his people, and establish his Kingdom – all in ways that no one could have anticipated?

One of the characteristics of the greatest use of language – poetry – is how words are combined in unexpected ways to renew our sense of the world, remind us of some forgotten truth, or even reveal to us things hidden from our everyday view. The birth of Jesus is the truest poetry, the Word that is greater and more powerful than anything ever produced by the human imagination.

And that’s one reason why His story has exerted such influence on the human race all over the world. If we had wanted to put together words in a story that would give us consolation, it would have been some human-sized illusion. We wouldn’t have, on our own, invented a Savior who, simultaneously, promised so much and demanded so much.

So we never entirely know what to say at Christmas except that the whole business is wonderful and wonderfully beyond us. Like Thomas Aquinas, all the words we deploy to explain such things to ourselves are, we can see, in the end so much straw. But then, we might remember, it also began with lowly straw, on which the Christ child lay, that night, in a manger in Bethlehem.

Turn up the sound