The death of Fidel Castro, who ruled Cuba with an iron fist for over fifty years has given rise to many comments both good and bad. Fidel Castro was a vicious tyrant, an evil man, who forced the people of Cuba to except the atheistic Marxist ideal that he espoused. He left Cuba in ruins a shell of what it used to be. Many people who did not live under this cruel tyrant have no knowledge of the real hardships that the people of Cuba, especially the poor, had to endure because of his poor leadership. Fidel Castro was just one more dictator in a long line of dictators that tried to impose a utopian world view on the very people he wanted to "liberate." He had many admirers, most of whom it seems worked for the New York Times, who believed that he was the greatest thing since Stalin. But, for those who had to live under his utopian idealism life was a dreadful exercise in basic survival from trying to find enough to eat to surviving political prisons where the worst kinds of torture were inflicted on the mostly political prisoners that were incarcerated there.

Theodore Dalrymple (not his real name) wrote a book entitled "The Wilder Shores of Marx" in which he shares his insights on the various communist countries he visited around the world. He says of Castro:

"Havana is like Pompeii, and Castro is its Vesuvius. The lava of his words has poured over the city continuously for thirty years, preserving it from any form of change except decay. This magnificent city, the pearl of centuries of exploitation, is an inhabited ruin; the inhabitants are like a wandering tribe that has found the deserted metropolis of a superior but dead civilization and decided to make it home."

Dalrymple goes on to describe the grinding poverty that these people have to endure day after day while Castro and his cronies live luxurious lives at their expense. Cuba along with every other nation that has experimented with communism is a total disaster. The article below is one of many good articles that I have read since his death a week ago.

Many people in the west admired Castro as a great liberator, but the people of Cuba knew better. He was really nothing more than a thug who brutalized a nation for more than fifty years. I pray that God will liberate the people of Cuba from the grip of the Castro's and give them a chance to reclaim and rebuild their culture.

It’s not hard to understand why many secular people in the West were fascinated by a figure like Fidel Castro. Where religion retreats, political faiths tend to advance to fill the absence of meaning, purpose, authority (yes, people crave that, too). Add a bold, charismatic leader willing to fight – even die – for something? It was the Iliad, Robin Hood, Star Wars, in hip scraggly beards, jungle fatigues, defiantly smoking Cuban cigars.

But why many religious people over decades were taken with the now departed máximo lider is harder to grasp. Vaticanist Sandro Magister has wittily observed: Pope Francis cried at his passing, Patriarch Kirill wept, but among those close to the situation – the Cuban bishops – it’s dry eyes all around.

In 1998, during Pope John Paul II’s pilgrimage to Cuba, George Weigel and I took in Havana’s Museum of the Revolution. I convinced him to go because my American guidebook, which lied nearly as much as the Castro brothers, called it “a must for anyone with a taste for history – allow yourself plenty of time.”

It was indeed a “must,” but not as advertised. A piece of a fighter jet shot down during the failed Bay of Pigs invasion. Dusty artifacts with curling paper labels, clearly neglected for decades. As for time, the crowd was minimal – in fact, just the two of us, despite all the foreigners in town.

There was much talk then about changes in relations between “the Revolution” and the Church. But as was plain to see at the museum, no one – not even Cubans – cared about “the Revolution.” The Revolution was Fidel, and vice versa.

Many words have already appeared trying to assess Fidel as a world-historical figure. The Sunday New York Times devoted seven pages to him – excessive, but generally fair, even admitting that the Times’s own reporter, Herbert Matthews, was complicit in misrepresenting Fidel in the 1950s.

In fact, absent the accident that he was operating on an island near the U. S. Mainland and stumbled into the middle of the Cold War via a hasty agreement to accept Soviet nuclear missiles, Fidel was not, at the outset, much different from other Latin American caudillos. With Soviet backing ($5 billion yearly, when the USSR could afford it), he worked much mischief around the world. But when that subsidy disappeared, so did the illusions. 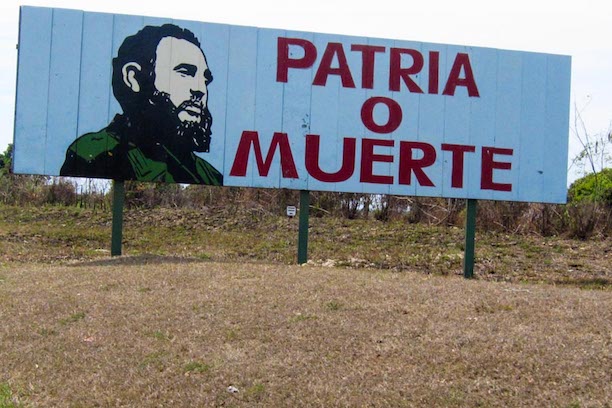 He talked more than most, obsessively, hours on end of empty bravado and self-referential nonsense – that nonetheless brought imprisonment and death on hundreds of thousands and drove many more into exile. But the international Left immediately saw his potential.

Franco in Spain and Pinochet in Chile were condemned for doing a fraction of what Castro did to his own people. And they left their countries in better shape than they found them. Fidel ran a ruthless, repressive regime, and wrecked his country with harebrained schemes.

He once, personally, tried to cross the hump-backed Asian Zebus with local Holsteins, hoping to create a Cuban supercow that would set socialist records for milk production. (You can look it up.) His revolutionary “ideas,” such as they were, were equally misbegotten. But Castro “stood up” to the United States and that was enough to make him a philosopher and world leader in some quarters.

For reasons hard to fathom, some Catholics have long been fascinated about his attitude towards religion – even the mysteries of his “faith” in the end. Salesians and Jesuits educated Fidel, and when he first came to power, the New York Times claimed he’d evolved from Christian Democrat, on Jacques Maritain’s model, to Latin revolutionary.

There was never much religion in him, however, except the occasional effort to baptize revolution – attractive to certain Christians already half-secularized and seeking purpose in politicized peace and justice. (They could somehow overlook that Fidel had brought the world to the brink of nuclear war – and madly pressed using nuclear weapons to the reluctant Soviets.) But others noticed that in the Christian/Marxist dialogue, traffic was always one-way: Christians becoming Marxist, rarely or never Marxists becoming Christians.

In the 1980s, Castro did a number of interviews with a Brazilian Dominican Frei Betto, published as Fidel and Religion, mostly an effort to connect the Cuban Revolution and liberation theology. It sold like crazy even though Fidel continued repressing the churches and Catholic resisters as much as ever. A great Christian witness, Armando Valladares, spent twenty-two years in the Cuban gulag simply because he would not say, “I am with Fidel.”

Meanwhile, Christian fellow-travelers were like someone who bought a boat because the builder claimed its revolutionary design would work better than anything yet conceived. It keeps failing – because of contrary winds and waves, or an (allegedly) disloyal crew. But boats are supposed to be able to withstand winds and waves, and to be manageable by ordinary, fallible human beings. When a design always fails, maybe the fault is the design.

I was once in a conference with Gustavo Gutiérrez, the father of liberation theology. Someone asked whether, if capitalism were better at helping the poor, he would accept it. He said he doubted it was true, but yes. It’s now been proven beyond all possible doubt.

Castro’s regime was an example of what Friedrich von Hayek called The Fatal Conceit – the errant belief that some great leader or party can run things via central planning. Fatal, because it ignores human freedom and the wisdom in concepts such as subsidiarity and federalism. As JPII once remarked, it was a system “built to fail.”

Prior to Castro, Cuba – like all Latin America – had many poor, but also the largest middle-class in the Caribbean, and a creative people. After Castro, there is equality – in misery – and widespread listlessness. You’ve never seen a place that’s so obviously gone backwards, except an archaeological site.

For many, of course, the blame for that will always lie with America, the economic embargo, globalization, lack of Christian solidarity. Curiously, such catastrophes sooner or later always overtake socialist societies (witness Venezuela). None more so than the one we may now hope is past: Cuba.