The Law of Unitended Consequences

The law of unintended consequences, often cited but rarely defined, is that actions of people—and especially of government—always have effects that are unanticipated or unintended.

In the first chapter of his Letter to the Galatians St. Paul admonishes the Galatians for "deserting" the Gospel of Christ in order to follow a new gospel that he (Paul) had not preached to them.

"I am astonished that you are so quickly deserting him who called you in the grace of Christ and turning to a different gospel--not that there is another gospel, but there are some who trouble you and want to pervert the gospel of Christ. But even if we, or an angel from heaven, should preach to you a gospel contrary to that which we preached to you, let him be accursed. As we have said before, so now I say again, if any one is preaching to you a gospel contrary to that which you received, let him be accursed." (Gal. 1:6-9)

St. Paul is not afraid to say what needs to be said, because he understands that if he remains silent that his silence will only reinforce this conflicting message and may ultimately lead the Galatians away from the true Christian message that Paul had preached to them in the beginning. St. Paul's words may seem harsh by todays standards but, he was not about to retreat and abandon the faithful to the wolves in sheep's clothing that were trying to lead the people away from the faith that Paul had preached to them. St. Paul was being a good shepherd. This passage from Galatians is a good lesson in leadership for all of us especially in these times, because of the plague of moral relativism and political correctness that is paralyzing so many of our leaders. Many of these same leaders are intimidated into silence out of fear that they may offend someone and incur the wrath of the group or person that feels victimized by the truth. Some people need to be confronted and if they are offended by the truth than I am sorry, even so, our responsibility is to the truth which is revealed through Christ and his Church for our salvation. If we remain silent out of fear and our silence leads to the loss of one soul than we have failed to head the two great commandments of Christ, "love of God and love of neighbor."

Our society is reaching the breaking point, I believe, because there are way to many people who are afraid to speak the truth and confront the culture of death. Little by little the political establishment is infringing on peoples free speech rights regarding faith and morals. The national and local media is also complicit in this attack when they print stories condemning any one, who like St. Paul, condemns the popular cultural trends of the day. We are at a crossroads and silence is not an option any longer. In fact silence is nothing more than tacit approval in my opinion.

Silence in the face of evil more than any other thing leads to unintended consequences that may bring about the end of our culture. I found this article on The Catholic Thing by Anthony Esolen which I hope you will read and think about.

My friend, the inestimable Robert George, likes to ask his college students how many of them, if they lived in the South before the Civil War, would have opposed slavery. They all raise their hands. “Bless their hearts,” says he, and then he advises them what their opposition would have cost them: ridicule from the most visible political and intellectual leaders of their society; slander of their motives; incomprehension at best from their families; loss of employment; loneliness; and scant gratitude from the people they aimed to help.

Nor is it clear how they could form a moral position running athwart so much of what they must have taken for granted from the time they were born. That too would require something akin to self-surgery without anesthesia: to tear some feature of your errant culture out of your flesh, down to the roots with all their spikes and barbs. Nor will you take up that scalpel on your own initiative alone. You have to embrace an authority over against what everybody knows, what everybody says, what everybody does; and this authority must do more than recommend. It must command, even in the face of suffering, doubt, and failure.

Ah, the daydreams of self-congratulating man! What other people would be, no one can tell, but if we lived in Nazi Germany we would all be an Oskar Schindler or Corrie ten Boom; we’d never have caught the nationalist and socialist disease; we’d have seen through the lies, even when presented in such bland and moderate and scientific and patriotically reasonable terms as you could find in the best newspapers – not the Nazi papers, no, but the tag-alongs, those that a decent man could write for while patronizing his Jewish haberdasher.

Nor would we have danced to the Bolshoi balalaikas. We’d have seen all those churches confiscated and turned into museums or barns, or razed to the ground, and we’d never have nodded along with twelve years of school teachers slandering the old faith and congratulating us for living in the most progressive land the world had ever seen.

We’d have done what is rarer than to accept reproach: we’d have rejected praise. We would have checked out maps of Siberia from the library, rejoicing in our hearts that we would soon join the genuine patriots there; looking forward to the gulag, mildewed bread, a mattock for chopping at frozen mud, gloves without fingers, and a two-inch square scrap of paper every day for wiping your posteriors. 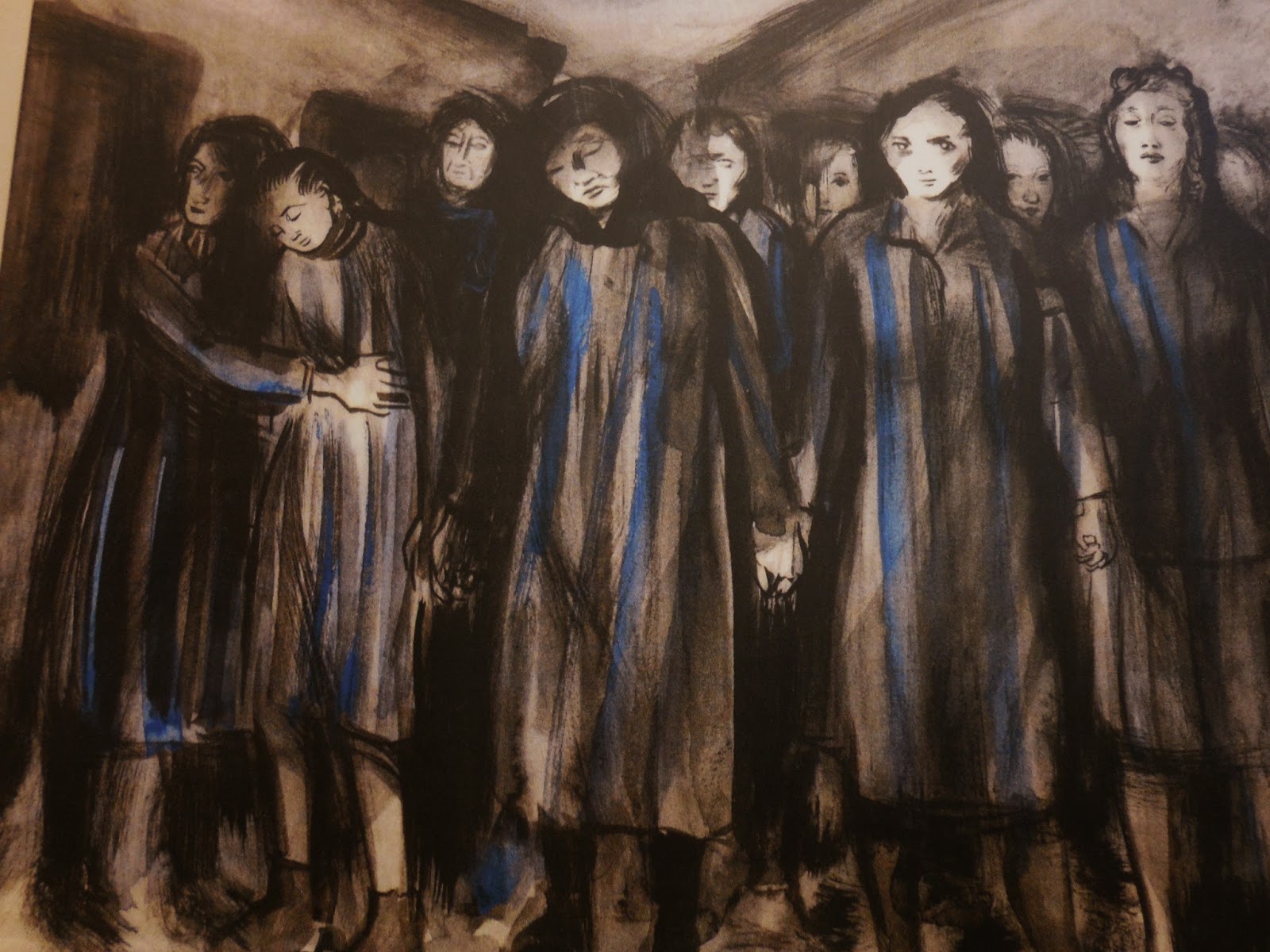 The Women of Ravensbrück by Helen Ernst, 1946 [Corrie ten Boom was a prisoner there]

That’s what we’d have done, and we’d have come to our determination all on our own – self-judging, self-commanding, self-obeying.

We don’t get to choose the public evil of the society into which we are born. Some of us, if we remain true to Christ, will be called by that public evil to endure the martyrdom of blood. So did the innocent and fiercely loyal Carmelite nuns in Paris, as they ascended to the guillotine during that great secular heaving-up of madness, cruelty, vainglory, blasphemy, and lust.

Others will be called to make a far less terrible sacrifice. What is the public evil of our time? What single “good” will cost you the most, through public ridicule or persecution, if you reject it and act accordingly?

It is actually difficult to claim that, take it all in all, Nazism was responsible for more bloodshed, and for more contemptible reasons, than the Sexual Revolution has been. But I’ll shrug and concede for the sake of argument that it is worse to be a clerk in a Nazi train station than to be a clerk in a Planned Parenthood clinic.

In any case, the point is that we are not called to oppose, notionally, comfortably, the characteristic evils of other ages, basking in the glow of a righteousness that costs nothing. We are called to suffer in opposing the characteristic evils of our age. And we will not begin even to conceive of how such a thing is possible, if we do not obey an authority that transcends mankind.

A Catholic pastor in Providence, Rhode Island, recently fired his music director, because the man had “married” another man, as was known to the people in the congregation. Had the priest not fired him, I can tell you what every teenage boy in the pews would have concluded: that the Church doesn’t really believe what she says, and that when it comes to sex, you may do as you please, so long as it isn’t cruel in those more flagrant ways that offend the sensibilities of the “right” people. Such would be the snare in that boy’s path.

But several people in the congregation decided to interrupt the Nicene Creed at the next Sunday Mass, singing “All Are Welcome,” knowing they would be showered with praise by the people who matter, namely reporters for the local television stations and newspapers, and leaders of opinion in the best “progressive” and “inclusive” societies.

They float along the river. They choose their judgment, which is only the judgment they have derived from years of imbecilic schooling, mass entertainment, mass media, and chatting with one another in material comfort, against the judgment of the Church and the express words of the Scriptures. They cut the Scripture to fit their sexual cloth.

That, and not the Church, is to bring them victory and salvation: Sieg, Heil.